SUBSCRIBE to receive Leanne’s free tips on how to Use Color, Light, Art & Flow State (aka The Zone) for Optimal Health, Healing, Creativity & Productivity!
and get her FREE Healing Colors Screensavers as a Welcome Gift!

How can Blue Light both HEAL You and HARM You?

Blue light is vitally important for our health.

But the TIMING of that blue light exposure is crucial. When you get Blue Light at the right time of day, you can heal your body, mind & soul, balance your emotions, treat depression and anxiety and even heal cancer and many other illnesses.

But get Blue Light at the WRONG time and it can cause a whole host of problems, including insomnia, Cancer , Alzheimer’s and many other illnesses.

How Do These Blue Light Photoreceptors Control our Circadian Rhythms? And how can this help my Sleep, Jetlag or Seasonal Affective Disorder (SAD, aka Winter Blues)?

These melanopsin blue light photoreceptors are sensitive to a specific range of wavelengths of blue light that, not surprisingly, correspond to the color of  BLUE light that we see in a midday sky on a clear day.

(This band of blue wavelengths is typically cited as 446-477 nm although some sources say the peak blue light sensitivity of the melanopsin receptors ranges from 459-485 nm).

Our blue light photoreceptors communicate directly with our pineal gland and control our circadian (daily) rhythms by providing signals to the suprachiasmatic nucleus (SCN), the brain’s master clock. They also project to many other brain regions, influencing myriad aspects of human physiology. And research shows, that these cells are uniquely sensitive to blue light..

Whenever our eyes see this color of blue light, our blue light photoreceptors tell our bodies:

“It’s the middle of the day! Be wide awake! Shut off melatonin production!”

Melatonin is a VERY important hormone and anti-oxidant

Not only does melatonin help you get sleepy at night, when your melatonin levels are high enough, you are protected from a whole host of diseases, including all types of cancer.

Blue Light and its Connection to Cancer

Research has shown with people who have cancer, increasing their melatonin levels actually STOPS and reverses the cancer growth.

Avoid Nighttime (ie. after dusk) blue light exposure – Blue light at night suppresses melatonin production.
Blue light is emitted from many light bulbs as well as from all LED screens (see info on LED screens below). 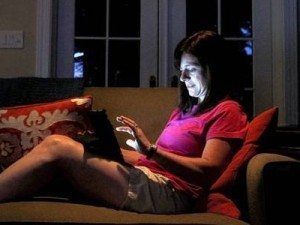 Woman using an ipad at night – notice how blue her face looks from the bluish white light emitted from the LED screen?
All LED screens emit a high percentage of blue light.

Daytime blue light and exposure to natural sunlight helps promote healthy melatonin levels at night. (Also, blue light emitted from your electronic devices during the DAY is not a problem. There’s no need to block blue light from your LED screens during the day.)

If you live somewhere that it’s often cloudy or you work in an office with no windows, you can supplement your DAYTIME blue light requirement by using a Blue Light Therapy Device

This is the basic premise behind why Blue Light Therapy devices retrain the biological clock and our circadian rhythms. 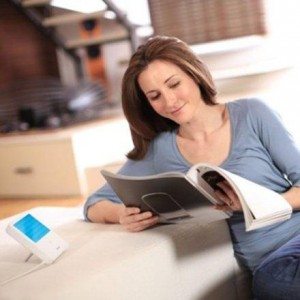 There are other blue light therapy devices for SAD and DSPS, but after reading countless reviews and trying this device out for myself, I can now personally recommend this Philips Blue Light Therapy Device

NOTE: If you plan to use this light therapy device for travel and treating jet lag, look for this earlier, better quality version with the clock on it and with a rechargeable battery. It’s well-constructed, compact and sturdy and doesn’t buzz like the newer, less expensive models reportedly do. It’s the model I’ve been using for years and it continues to work great.

Full US retail for the Philips Blu with rechargeable battery full retail is $299 but on the US Amazon.com website you can often find them for around $150 or sometimes less.

(where it’s marketed primarily as a SAD light although it has other applications as mentioned on this page) have told me the prices are much higher in Europe, the UK and elsewhere. In the UK, for example, the exact same Blue Light Therapy Device costs 185 pounds!

Since the GoLite Blue Light with the clock and rechargeable battery

is designed for worldwide travel (they also very effectively treat jetlag), they can be used with any electrical system – you just need to get an inexpensive travel adapter to make the plug work in your country.

For over 15 years, I was unable to fall asleep before 2 am. In recent years, my bedtime had gotten pushed even later to as late as 4 am. I would consistently wake up between 8 and 10 am each morning, but never felt fully rested, and I wouldn’t feel fully awake until 1 or 2  in the afternoon. Although I tried many times to go to bed earlier and get up earlier, I failed every time to shift my sleep schedule.

I thought I was just a night owl and had resigned myself to this late night schedule. Until, that is, I was doing research for my talks about the Healing Effects of Color, Light and Art, and I read about DSPS (Delayed Sleep Phase Syndrome). This is a condition where a person’s biological clock (circadian rhythm) gets so off-kilter, that their body is no longer able to follow regular, healthy biorhythms. They produce less melatonin than is healthy and as such, they don’t get sleepy when they should ie. when it gets dark outside.

Since I’ve worked for myself for over 15 years, my night owl lifestyle wasn’t that big a deal because I could start work late in the day and work late into the evening. But I was definitely beginning to feel the negative effects of not being on a proper sleep schedule.

As soon as I learned about DSPS and how blue light therapy has recently been discovered as a very effective way to treat this, I researched several Blue Light therapy devices and ended up purchasing my Philips Blue Light Device.

In just 3 days, I shifted my circadian rhythm and internal clock by a full 3 hours!

I now go to bed between midnight and 1 am (by choice since this suits my lifestyle) and get up between 7 and 8 am. I feel fully rested when I get up and don’t have any more lag of several hours before my body and brain wakes up. I get sleepy once it starts getting dark and by midnight I’m ready for my head to hit the pillow. I feel like a new person! And my early morning friends are still in awe!

Note: I still periodically slip into my late night owl habits, but it’s nothing like it used to be. 🙂 When I start pushing past my sleepy time at night, going to bed too late and getting up around 9 am (which is later than I’d like), I simply use my blue light therapy device for a couple days (15-30 minutes in the morning as soon as I get up) and I get back on track again. I immediately start getting sleepier earlier, going to bed earlier and getting up earlier.

I’ve now recommended the same Blue light therapy device to numerous people who’ve been suffering from insomnia or poor sleep, and they’ve all reported back to me that within only 2 or 3 days they were already sleeping much better at night and feeling much more wide awake and productive during the day!

LED screens are designed this way simply because of the chemicals that are needed to emit the light within them – these particular chemicals just happen to emit more blue light than other wavelengths.

To understand how White light varies based on its constituent colors

Just think of warm incandescent bulbs that contain more warming reds, oranges and yellows. Then compare how that incandescent bulb looks next to a cool blue fluorescent bulb which contains a lot more blue within its white light. They both look like white light to you, but they are each made up of different colored wavelengths that influence the warm or cool nature of their white light.

LED screens are similar in that they emit white light, but it’s a very BLUE-based white light. 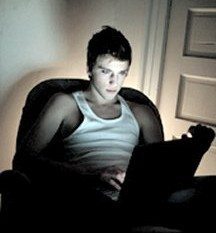 (Reading non-back-lit e-books (like the original black and white Kindle) or regular paper books is fine.)

Any time after dusk, it’s best to eliminate all blue light from your field of vision to support proper melatonin levels.

A very effective way to eliminate the blue light from our computers at night is to install a free and safe program called F.lux on all of your computers.

At dusk, this program starts to very slightly modify the colors of your screen to be a soothing, soft peachy pink instead of that glaring blue white light which suppresses melatonin and causes insomnia.

Here’s a safe link to install the program on your computer (takes only a few seconds to complete the installation).

I recommend you do the installation at night so you can see the instant and dramatic shift in the colors emitted from your computer screen as soon as the program kicks in. You’ll be amazed at the difference and how much more calming and soothing the resulting warm peachy-pinkish white screen looks compared to the stark blue screen.

This article is written in very easy to understand layman’s terms (unlike most medical research studies 🙂 ).

What’s in a Color? The Unique Human Health Effects of Blue Light

4 Comments on “Blue Light – Why is it So Important?”

You're almost done! Click the confirmation link in the email we just sent you to get your FREE HEALING COLORS OPTIMIZATION SCREENSAVERS. Check your INBOX and SPAM folder RIGHT AWAY. (Gmail often sends subscriptions to SPAM)... then just CLICK on the CONFIRMATION LINK. As soon as you do, you'll get your Free Screensavers in your inbox!

I promise you'll only get valuable information that I think you'll love! 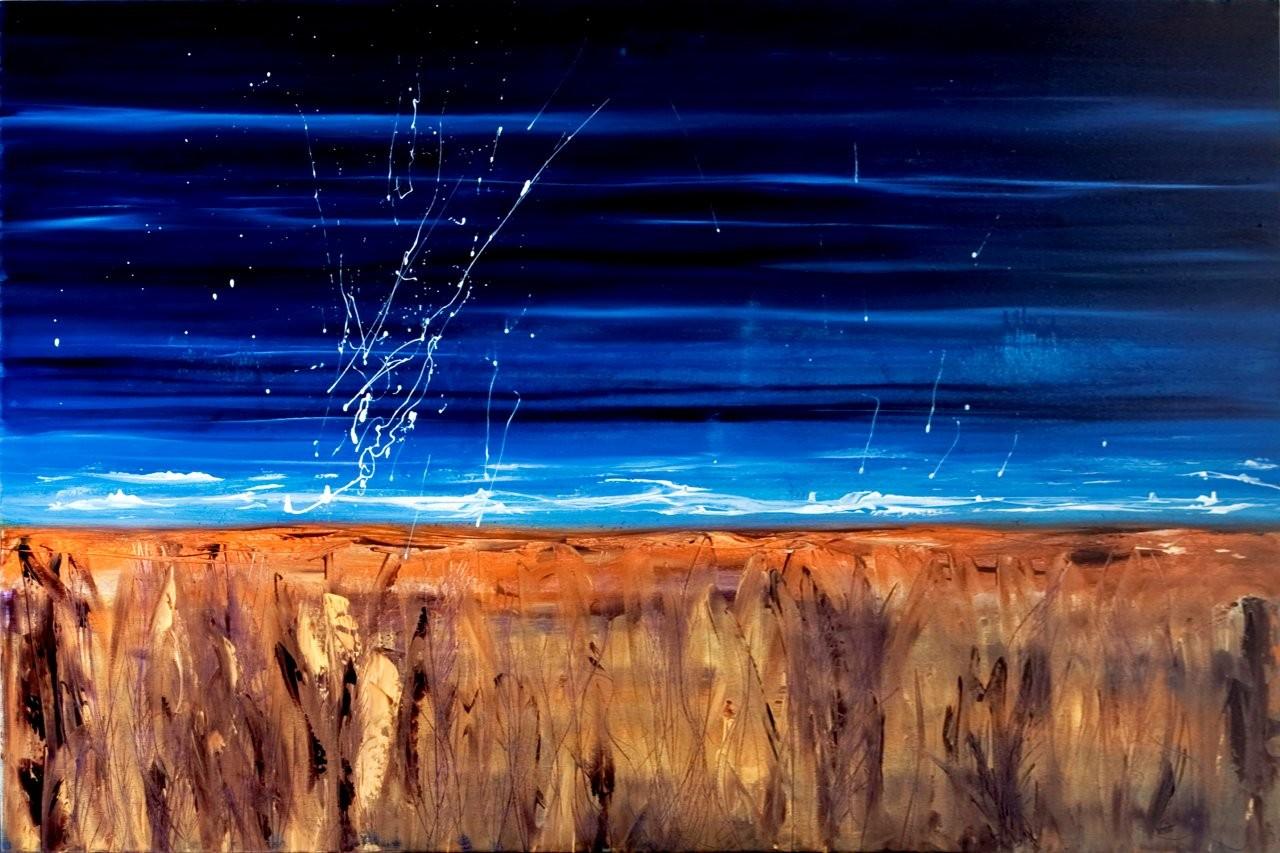 If you'd like to select your preferences for the type of tips that interest you most, Please "CLICK HERE" to Sign up & get your FREE Screensavers! (instead of filling out the form below)

You have Successfully Subscribed! Leanne's weekly Color & Flow tips will start arriving soon! (If you use Gmail, be sure to drag that 1st message from your Promotions folder to your Main Inbox so you don't miss out on any of her Healing, Creativity & Productivity tips! ) You may now download your Free Healing Colors Screensavers here: https://catalyticcolor.com/leanne-venier-free-healing-color-screensavers/

I promise you'll only get valuable information that I think you'll love!

This function has been disabled for REDjuvenator Light Therapy by World Leading Expert, Leanne Venier.